Today Margaret and I headed up to Sanford to meet other MINIs and drive with Lori around her home town, with photo opportunities and then lunch (and beer). A fun day, made even better with the spectacular weather – blue skies, hot sun, and temperatures in the 70s! 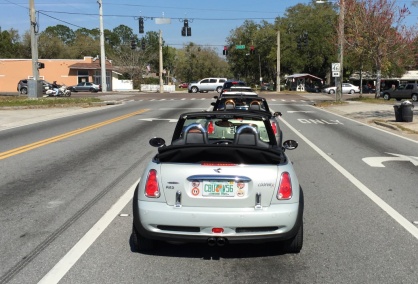 I drove Black Knight over to Orlando MINI this morning, for it’s first service. I was a bit puzzled why the car had been insisting on the need for an oil change for the last week or two (since it’s not yet a year since I bought her), but all the MINI information says to follow the cars service recommendations.
I emailed and spoke to the dealership to book the appointment, and made clear that the service seemed early – but was told “bring it in”, so I did.

On the way to Orlando MINI, I finally reached 5,000 miles (low mileage, because of last years inability to sit and drive for a couple of months – and thus missing MTTS!).

Of course when I got to the dealership, the service writer came back and said “we can’t do the service, it’s too early”! A level of “discussion” followed, and after a while happily they decided to go ahead anyway (thanks, Garrett).
The issue was that Black Knight apparently has it’s manufacture date, not it’s sales date, to base the service decision on. It’s likely the dealership omitted to correctly set that date when they sold the car last year, so I had no qualms over “encouraging” them to follow through and complete the oil change (and avoid me another trip in a few weeks). 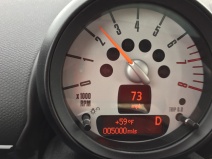 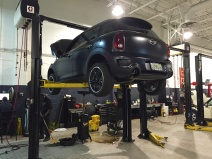 I’ve had zero issues in the last year so nothing else to be done, including “do not wash”; I doubt any MINI dealership is properly set up to handle the frozen paint finish, since there’s less than one car per dealership in USA!

I’ve enjoyed being back behind the wheel of a MINI this last year – the car is much more enjoyable than the BMW X3 I had before!

I sat in an F56 at the dealership today while I was waiting, and it seems more cramped than I’m used to – not surprising as the Countryman is bigger, and clearly noticeably so. The new F56 interior design is nice though; I guess we’ll see F56-style Countryman cars in a couple of years, right when I’ll be due for another car 😉

This weekends Mickey & MINI demands that Black Knight gets washed. With sciatica making it nearly impossible to crouch down and lean forward (which it turns out is very necessary for washing a car), and with the strong summer sun and regular late afternoon rains, I’ve not washed the car since mid June! Of course the garage, and the fact that I couldn’t drive for a long while, means it was only very dirty, not horrifying!
But happily now I’m much more able to drive, and wash Black Knight, and she looks much better for it! 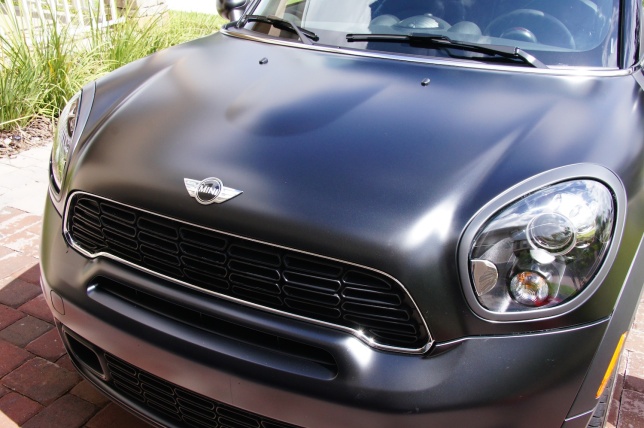 I’m really very happy with using Dr Beasley’s Matte Car Care Products, the shampoo is easy to use and provides a good wash and finish, and the final finish spray gives a little extra smoothness to the matte paint … I could argue that washing Black Knight with these products is easier than a regular finish, since you don’t need (in fact must not) polish it!