Surprisingly, I discovered this weekend that MINI USA still send out welcome kits, quite differently packaged to what I’ve received previously; the interesting package design is intended to be re-usable, with instructions to turn it inside out and use it as a bag: 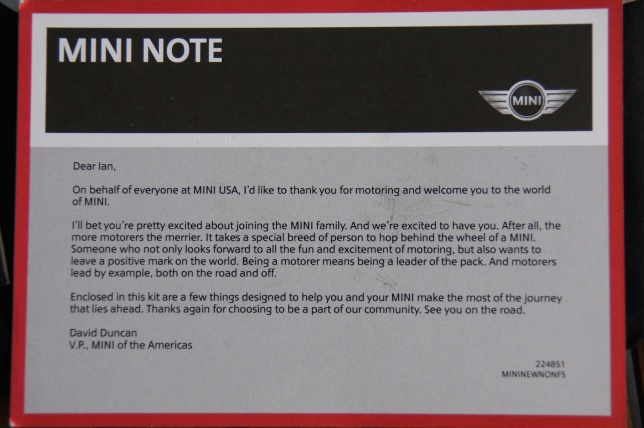 Contents include the usual MINI pen and notebook, also a quite nice MINI flash drive and of course a copy of MINI International; also included are “adverts” for MINI insurance, MINI Performance Motoring School, MINI Financial (but I’ve already bought the car so can’t understand this one!), a Name Your MINI sticker, a quite fun 101 Fundamentals of Good Motoring booklet, and of course the Welcome Letter (sadly no longer from Jim McDowell).

It’s been a while since I posted about MINI collectibles – during the London 2012 Olympics we visited the BMW Pavilion, and I collected these hand-out Top Trumps MINI / BMW cards: 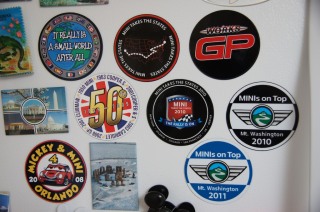 During MINI Takes The States 2010 there were some fabulous themed comic strips created over at My Geek Odyssey, featured by MINI Takes The States … After the event the original artworks were given to Ryans MINI Adventure and auctioned to raise money for the Leukemia & Lymphoma Society. I bid for a few of the artworks and was lucky enough to get this one:

A very nice collectible – and a good cause too!

UPDATE: The artist, Bruce, very kindly sent me a high resolution version of the complete colored comic published by MINI Takes The States – thanks!

We collected quite a few nice pins, badges, etc during the last week 🙂 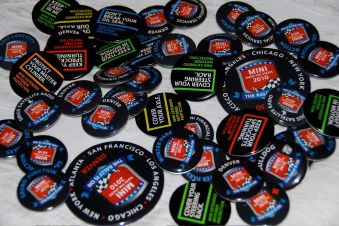 It’s a curious collection of stuff being handed out at MTTS this year – starting with the bag itself which is supposed to be made from recycled MINI posters!

In addition to the large pin above, MINI are giving out a small pin at each overnight stop – I bet there will be some eBay selling for folks trying to collect the full set!

There’s also some nice purchasable stuff, including a metal plaque like the MTTS’06 one, and some better quality shirts (pics some other time!)

Today, we drove to Grand Junction … many MINIs have already left Salt Lake City for the Bonneville Salt Flats, but when it emerged that it will be a parade, led at a limited speed, and not a “free for all” – along with the issue of salt all over and under the car, and the fact that it’s a three hour detour, we chose not to go! Maybe they will let the MINIs get to 70mph, but I can legally go faster than that in Utah!
So instead we’re heading straight to Grand Junction, and more scenery!