The unplanned extended stay of GPMINI at MINI of Orlando has left me, thanks to Bryan, with the chance to drive a brand new MINI Cooper S convertible for the weekend! I must say, it’s much nicer than driving around in some no-name rental … This convertible is quite nicely equipped with “punch leather” (perforated) seats, Harman Kardon stereo, and automatic transmission with paddle shifters; the top is interesting too, in “denim blue” (though I wonder if the texture helps hide roof creases!): 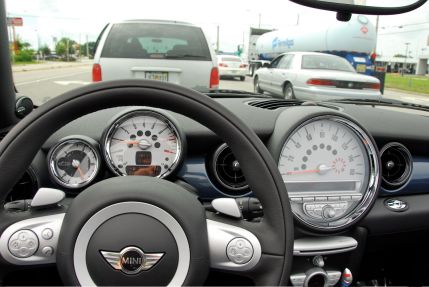 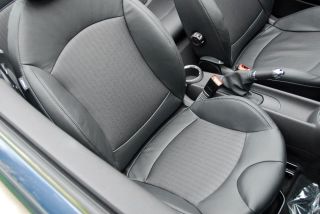 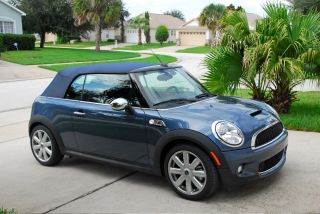 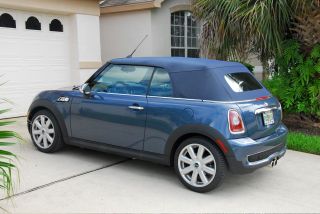 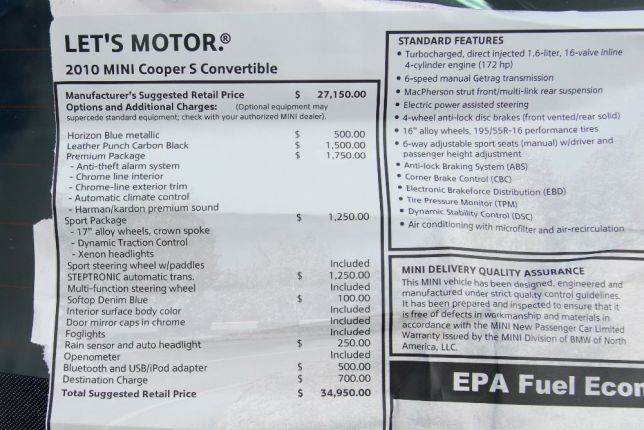 Sadly, I would not be “MINI thrilled” to own this car – though I’m not sure if the experience is this specific car or the newer R56 MINIs in general.
First, the engine is quite noisy (it sounded terrible inside the garage), but the car solves this about one start in three by just stalling at start! A bit annoying. Also, the car seems to always run it’s cooling fan after even short drives – it’s funny that GPMINI is staying at MINI of Orlando for this same reason, while this brand new car does it as habit.

I tried out the new Harman Kardon stereo system, playing all my standard “demo CD” reference tracks. Of course I first tried just plugging the iPhone in to the equipped USB jack, but that had no effect at all. I had to copy all the music over to a USB memory stick which then did play (though it took about a minute first to load in the directories – or maybe search through all the photos on the stick, to find just the music!)
The Harman Kardon sound is MUCH better than my previous R56, I’d say it is as good as the original R50/R53 system, except it seems to be missing the “modes” (Spatial, Festival, etc). However, the sound is nowhere close to my GP, or my Q5.
There’s a general lack of mid-clarity in the sound, so that vocals are not as focused as I am used to. There’s some bass but not what I’m used to – and turning up the bass adjustment past +3 just muddies the low end.
But I had most trouble with the treble. Listening to radio on the drive from the dealership, there was too much treble coming from the windshield speaker directly in front of me, detracting from any stereo effect – but then on some of my well known test tracks, I found that I had to turn up the treble to pull the female vocals out of the music.
I settled with bass +3 and treble +2, but I know that for different tracks I’d constantly have to turn the bass or treble down; it’s as if the bass/treble adjustments aren’t at the correct frequencies to best enhance the car.

Of course the big problem with MINI now is that you have no choice; there’s no simple way to install an aftermarket stereo. This would be a HUGE concern for me, if I was to consider replacing my Q5 with a Countryman, if that sound system is as poor as this car.

All said, the car is nice to drive – it corners well, looks good, and drops/raises it’s top fast and sweet. There’s just one thing that would stop me ever considering owning this car:
$35,000! 😦

Thanks to Brig, Joel, and all at MINI of Peabody, I got to enjoy today’s fun MINI rally in beautiful weather in this 2009 MINI Cooper Convertible with only 4,300 miles on it! It looked really nice inside, especially the Piano Black dash: 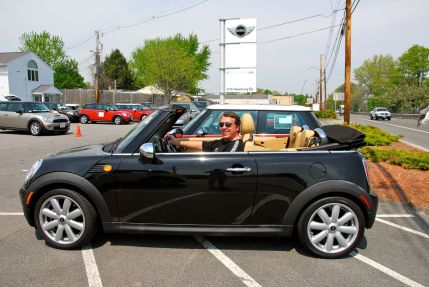 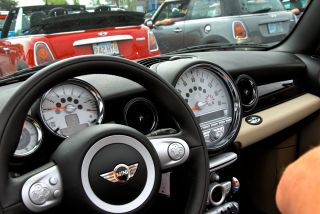 During the rally, it was very nice to drive, easy to shift gears – but noticeably lacking in power, at least compared to my GP and Q5! On the other hand, I still think it’s somewhat of a positive to have to shift gears more to keep the car performing well – it makes for a more interactive MINI experience, than with an S!
The ride was particularly good, even on the equipped 17″ wheels, and it wasn’t very windy or noisy on the highway either.
Of course, I know from experience how cold the MINI convertible is in New England winters, so it’s not the car for me … but it’d be fabulous a bit further South 🙂

My first stop for MINI news is still GoMotoring, which very clearly aggregates loads of MINI website feeds (including mine!); visiting just now I saw the following feeds for MotoringFile: 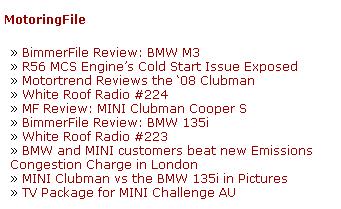 The interesting one for me is R56 MCS Engine’s Cold Start Issue Exposed, but clicking it takes you to a dead page of MotoringFile:

Presumably it just means the story has been written, but then date-edited to appear in a day or two … exciting 😉

It’ll be interesting to read about the issue – I did not have any “cold start” related issues while I owned GBMINI#5, but then I didn’t own it for long! GPMINI has always been fine starting at any temperature, but GBMINI#6 exhibits the same “cold start” issues that I’d previously experienced on my other MCS’s – and like those MINIs, switching to a lower octane gasoline apparently sorts the issue for me.
It’ll also be interesting to read the MotoringFile presentation of the issue – some people expect MotoringFile to be “good news only” regarding MINI …

While on the subject of the R56, I do have a couple of final positive thoughts about that car! In case I wasn’t clear previously, the R56 claimed MPG improvements are obviously true – GBMINI#5 got between 28 and 29 mpg (real, not OBC) while I owned it. Both GPMINI and GBMINI#6 are getting between 23 and 24 over the same drives, time of year, etc.
In the summer, when we don’t have winter formulation gasoline, and when I do longer drives for MINI events, I’ll get 30+ in GPMINI – so with the R56 I might expect to get as much as 35! Pretty good, I’d say.

The other thing is that the R56 automatic air-conditioning is improved over that in GBMINI#6 (the first auto-a/c MINI I’ve owned since my first, way back in 2002). The non-R56 auto-a/c in GBMINI#6 works much better than it did back in 2002, but the R56 system was quieter and a little smarter too … for example, on cold days I like to blow the air on my hands for a while to warm them up (gloves? me! no …) so in GBMINI#6 I’ll press the hands and feet buttons (using the hands button only is too noisy, so send to feet also to reduce the noise), then after a while press the buttons again to revert to auto.
But in the R56, I noticed that after a while, when the air is warm, it would automatically direct a subtle amount of warm air to my hands, while still blowing to windshield and feet (something the older systems can’t do!) … almost not enough air to notice, but enough to warm my fingers. Nice touch 🙂
(but no, it’s not enough to make me warm to the R56!)