An annual competition to challenge up-and-coming engineers, hoping to bring more skilled engineers in to the US workforce.
MINI friend Theo runs a robotics team at his school (Williston Northampton) and needed sponsorship to purchase the required kit – PG Trionic generously sponsored them, and so today in the regional competition, I joined the team to see them confront the challenge!

The challenge puts two “red” and “blue” teams in an arena at the same time, each team is two robot teams – so in the challenge you have to work with one other team, to beat two other teams! The idea is to collect your (red or blue) pucks from stores around the edge of the arena, and deposit them in scoring areas in the center of the arena. You can also try to prevent the other team getting their pucks to the center … scoring is used to rank the best teams (who go on to “world finals” later in the year): 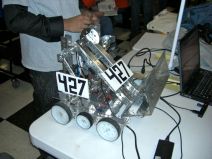 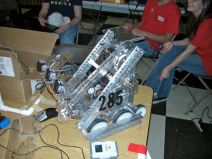 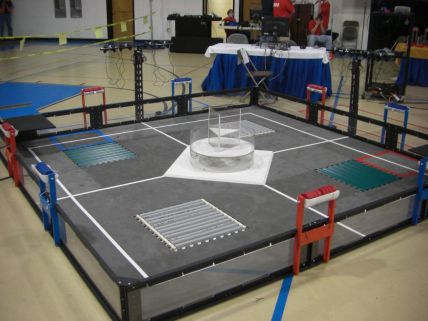 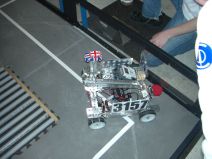 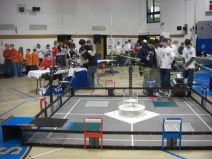 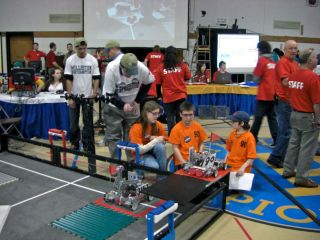 I also made a short video of the Williston team robot 3157, performing:

UPDATE – a report from team coach Theo:
After suffering the loss of a rear wheel (see Ian’s video), then later, a “seized” arm, we rallied for our third, fourth, and fifth matches with three flawless rounds!

Our robot excelled in it’s speed, maneuverability, and with its articulated arm, was able to provide impressive defense capabilities. Defense, in this
competition, meant tipping all the opponents’ pucks from their elevated trays before the opponents had a chance to collect them in their “baskets”. Once the pucks were tipped onto the floor, most of the robots were not designed scoop them back up again (a flaw spotted by an alert Williston Robotics Team member). Thus, by demonstrating such impressive defensive capabilities, our team wound up being sought-after for “alliances” with teams whose robots were designed to be purely offense-oriented.

In the end, my students’ design, their intelligence, and their brilliant game strategy earned us a 7th place among 28 competitors! Please note that we were the only first-time team and only had about 3 months in which we needed to design, build, test, and train drivers. Most other teams had 6 months in which these tasks were completed.

Williston Robotics went to the quarter finals and put on a very good show. However, the other 6 teams were just too strong. We ended the day as champions in our own right and sent the students off beaming from the experience. These kids have my very deep respect for what they we able to do!

Finishing 7th out of 28 teams is a spectacular result for a team that was only able to start developing less than three months before the competition! I look forward to seeing how impressive they can be next year, with a longer development time.