I’ve never really had significant issues with MINIs I’ve owned, at least not since the early days of SES lights and “bad gas” behavior … but my 2016 Clubman seems determined to be annoying with it’s repeated electric parking brake failure (here, here) and it’s back again today! The behavior is to report failure of the parking brake – even though the brake is actually applied and the car can’t move.

Since the car believes there’s a problem, it now won’t release the brake so no more driving. Luckily, a tedious sequence of turning off and on, applying / releasing / re-applying / re-releasing the parking brake, gets it sorted … for a while at least.

So back to Orlando MINI again this afternoon; they’re only half an hour away, friendly, and ready with a loaner vehicle each time – but it’s honestly getting rather “not fun” to keep doing this. I’m starting to get an understanding of those MINI owners that are so infuriated with repeated failures (and many of those no doubt are much more frustrating than my car).

One bright spot this afternoon though, is that the latest loaner is electric blue, reminiscent of Ed / Maxamini and a time to re-introduce my duck to the new car (although I have to admit, this new electric blue is quite a long way from the original color!): 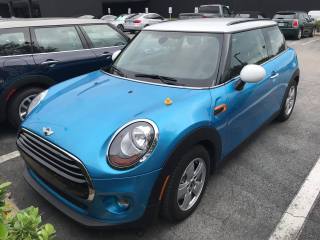 Hopefully, this latest repair attempt will be successful!